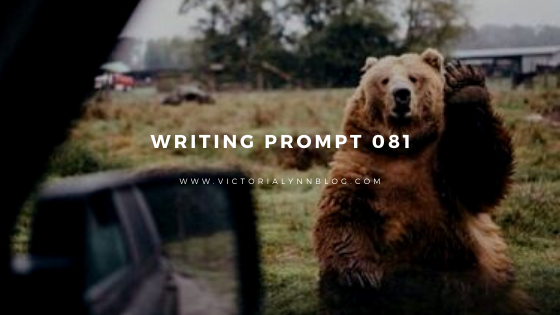 “A waving bear?” you ask, completely skeptical as you raise your eyebrows in disbelief with just a touch of concern for insanity in your eyes.

All I can say is, “The Lord works in mysterious ways.” I know, it sounds totally sketch. But, before you question my story even further, let me backup and begin by saying that it’s best if we start at the beginning of the story.

My mother had just passed away. I was distraught. My husband was driving and we were on the way home from the Funeral from Hell.

Don’t get me wrong, all funerals probably feel at one point or another like they are from the depths of Sheol, because there is something broken about death. We were destined for a never ending relationship with the Maker of our souls and the system the way it is now is broken and won’t be fixed until we all see Jesus at the end of life as we know it. So yeah, death and funerals not only feel like they are from hell, they quite literally are.

Anyway, back to the funeral. It felt like I was in hell for a few reasons. Have you ever felt like if you stuffed one more emotion you might explode? You get this itchy feeling all over and you get incredibly hot, but you soldier on, shaking hands with the next person and the next and the next, but you honestly have no idea what you even said to those well-meaning and compassionate people. You simultaneously want the moment back to remember what they said, but you want this whole ordeal over with . . . it’s complicated.

That miserable feeling made me want to pound my head against a wall, but I didn’t think it could get any worse until I saw my dad, whom I haven’t seen since I was eight and he threw the tea kettle at my mom’s head in a drunken rage. (Don’t worry, he missed and I never saw him again after he yelled all the way to his truck to go back to the bar.)

That whole, uncomfortable thing I was feeling earlier? Well, when I saw my dad, I saw red. My face burned with it and my knees and elbows started to tremble. The smell of Black Pine aftershave filled my nostrils. The smell of my childhood.

Caleb, my husband, gripped my upper arm and I swear that and the Holy Spirit was the only thing keeping me upright.

I had pictured, romanticized, dreamed and dreaded the moment I might see my dad again ever since I was eight. But it was honestly the weirdest experience. He came up to me, shook my hand. All the feeling melted away and I felt completely numb as he offered his condolences with a mostly blank, but somewhat sad look on his face.

“I’m sorry,” he said, then turned and walked away. I stood there, completely still, my hand out in front of me like a limp noodle and my brain completely dead.

And that was it.

Of course, I cried about it, blubbering to Caleb for over an hour while he held me in his arms on our rumpled hotel room bed, his back against the headboard and me sprawled across his lap with dirty tissues everywhere.

What about the bear you ask? We were on our way home. Driving from northern Washington back to California. Yeah, I don’t know why we didn’t fly either till the moment I am about to tell you about wrecked me and I knew we were supposed to be there for a reason.

We were on some backcountry, winding roads because they always make my heart sing when we stumbled upon what we thought was a rather large animal lumbering across the road. Caleb braked hard, a prayer shooting from his lips as we skidded to a halt a mere feet from the furry creature that was half hidden by the fog.

Now, having made it off the road, the animal sat back on its haunches and I realized it was a grizzly bear. Mouth agape, I put my hand to the window in awe and wonder of all wonders, the bear raised a paw in some sort of greeting.

I heard my mama and daddy’s voice calling me honey bear as I snuggled my Pooh Bear stuffed animal. The nickname had stuck and I had been called that my entire childhood. One of the dearest memories was lying on my dad’s chest, probably four or five with Pooh Bear in my arms and the smell of Black Pine aftershave in my nose. He was papa bear and I was his baby bear in my little child brain. Resentment towards my dad washed away in that moment as I wept and the bear from God wandered off into the foggy woods.

And that’s how a bear waved at me and a little piece of my heart was healed.

I’d love to hear your thoughts!