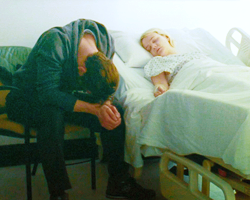 He didn’t know how to tell her.
After years of trying desperately to have a baby, there had been a small life in the womb of his beautiful spouse. With much trepidation, they had waited longer than most to announce their exciting gift to their friends and family. They did everything right. Ate the right foods, made sure she had enough rest, stayed healthy, even when the morning sickness was at its worst. They had prayed for years that this little one would come into their lives. And now, that dream had been washed away . . . again.
Numerous miscarriages had plagued their marriage, but never had the pregnancy made it this far.
She still had yet to wake up from the procedure. The blood loss had been too much for her. Even more traumatizing than holding her on the grocery store floor while she hiccuped through sobs and shuddered as the blood and incidentally the color slowly left her body was the fact that he would have to be the one to tell her. If there was ever a moment in his life that he could be doing anything else, it was now. But beyond that, he didn’t want to be anywhere else. The knowledge that his wife, his precious Amy, needed him was more compelling than any other need or pull on his life.
He wanted to be angry. Wanted to shake his fist at God. How could they be so close to holding the child of their dreams and have that dream stripped from their aching hands? Everyone always spoke of being angry at God when a loss or devastation occurred, and while that is the emotion that he wanted to have, for some reason, it didn’t come to the surface. The knowledge that God wished no harm on him and his beloved was instilled far too deep into his being for anger at God to be the prevalent thought. But being angry at nothing in particular, at the actual circumstances versus the Entity that ruled the world was an emotion that was strange and devastating all at the same time.
The need to protect was so strong within him that his heart beat rapidly at the dreaded task before him. It was a miracle his wife had survived. Between the blood loss and the actual surgery, it was the one solace in this circumstance. He tried to do what everyone always said. Find the silver lining. Look for something to be thankful for in it all. He knew that there was reasons to be thankful, but his mind was so numb, it wouldn’t obey his order to try and stay positive. What even was positivity?
How did one stay calm, let alone positive when he not only had to tell his wife that they had lost their child, but also tell her that the possibility of ever having a child was stripped from their grasp?

It has been an interesting task to try to get back to writing prompts. I stared at the cursor a lot, but I knew it needed to happen. Writing something needed to happen. It has been so long since I have actually indulged in the creative process. Re-reading or editing and publishing have been filling up my plate to the point where there was no room for the creative side. This prompt reminded me that even though it is hard, I need to push through if I want to actually get back to writing. Which I do. What did you think of this prompt? Do you want to see more flash fiction and writing prompts on the blog?
By God’s Grace,
Victoria

I can people with the rest of them, okay?⠀⠀⠀

“It's been my experience that you can nearly alw